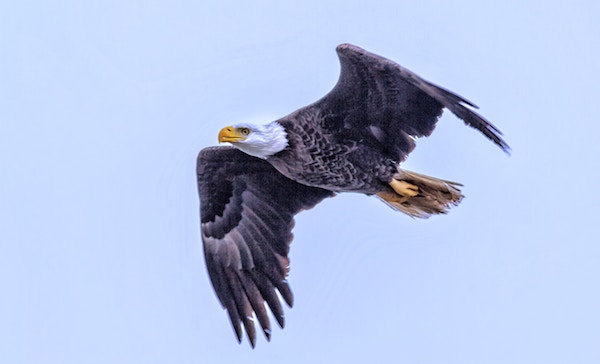 I Am the Living Word. My words are powerful and as you are made in My image, yours are as well. Speak wisely and with love. Convict, correct, comfort and edify with your words because the power of life and death lies in your tongue. Speak life!

The disciple John didn’t mess around. He started his book off with the revelation that rocked his world, and still rocks ours today: Jesus is God.

What a revelation – that Jesus’ name in heaven before He took on flesh and a human name, was “The Word.” It makes sense though, as He spoke the universe into existence. This is the fourth face of God as revealed on the seraphim. It’s the face of the eagle.

The face of the eagle means He’s spirit, supernatural and all-powerful. It means He is eternal. To know Jesus this way is to be in awe.

Now, what is concealed in the Old Testament is revealed in the New Testament. John reveals Jesus as the all-powerful God, but centuries earlier, Daniel hinted at what was to come. The name Daniel means “God is my judgment.”

So, Daniel pointed to Jesus as the righteous Judge. Now, some of you might not like the judgment part of God Almighty, but I do. Jesus judges me righteous. He took my filth – my sin – and traded it for His righteousness. What an exchange!

Do you recognize Jesus as your righteous Judge? Do you see the beauty in this face? Jesus as God has the authority to judge you guilty, but He doesn’t. He clothes us in His own right standing before the Father. That verdict is such Good News to me! Is it to you?