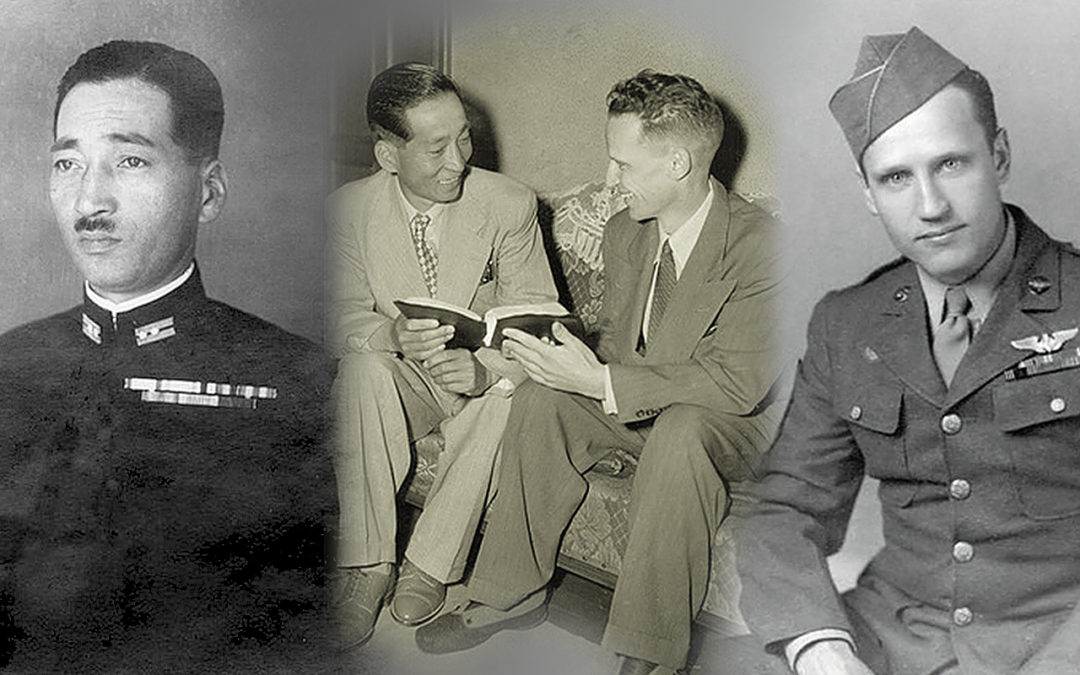 Holding a grudge is the poison you drink every day hoping it will make your enemy sick. Jesus says put the poison down! Forgive your enemies and do good to those who spitefully accuse you. Forgive as Christ forgave you and let the healing begin! You are called to make your enemies into friends for eternity.

The surprise attack left five destroyed battleships and 14 others either sunk or damaged. While it was a great day for Fuchida, it was the last day for 2,300 Americans. A day, one might say, of infamy.

Back in Oregon, Sergeant Jacob DeShazer was peeling potatoes when the news hit. Shaken by Pearl Harbor, he volunteered for a special mission led by Col. Jimmy Doolittle. This top secret mission would dare to directly bomb the heart of now hated Japan – Tokyo.

Although DeShazer and those who signed up for Doolittle’s Raid knew this was probably a one-way mission – they likely wouldn’t have enough fuel to make it to mainland China – they knew America badly needed a win.

Doolittle’s Raid was a stunning success, and DeShazer’s B-24 bomber did run out of fuel. He bailed out over Japanese controlled territory and spent the next 40 months as a prisoner of war routinely tortured by his captors.

He watched dozens of other POWs be beaten, beheaded or starved to death, yet DeShazer lived. With plenty of time in-between beatings to chew on the subject of hatred, he found himself desperate to know God. He asked his captors for a Bible.

While DeShazer clung to life, Fuchida was celebrated as a hero and seemed to be fated to live. In 1942, he came down with appendicitis and was unable to fly. The battle he missed, Midway, where the Japanese were soundly defeated, probably saved his life.

A few years later, Fuchida missed the grim reaper again when he was ordered to leave Hiroshima the day before America dropped its first nuclear bomb. His hatred for America grew just as DeShazer’s hatred for him and the Japanese would diminish.

You see, DeShazer finally got that Bible he had begged for. He truly met God as his eyes fell upon the words of Jesus on the cross, “Father, forgive them for they know not what they do.” Emaciated and barely holding on, DeShazer gained strength and purpose by deciding to love his enemies.

“I prayed for God to forgive my torturers, and I determined by the aid of Christ, to do my best to acquaint these people with the message of salvation,” he said.

Eventually, the war ended and DeShazer was released. He came home to America, but didn’t stay long. He couldn’t. He had to go back to Japan and take the love and forgiveness of Jesus to a lost and hurting people.

After the war, Fuchida became embittered. His stunning victory made no difference. His beloved Japan was not only in ruins, it’s military was dismantled. He became a farmer and in 1948, was getting on a train in Tokyo when he saw an American handing out leaflets written in Japanese. They said, “I WAS A PRISONER OF JAPAN.”

He grabbed one and began reading. He was especially hit by the part about Pearl Harbor and the man’s part in the Doolittle Raid. Fuchida could not put the leaflet down. Who is this Jesus? What is Christianity? He wanted to know more. Miraculously, a few days later, on the same train platform, a man was giving out Bibles written in Japanese!

He got one and opened it to the same words that transformed DeShazer all those years before. “Father, forgive them for the know not what they do.”

“I was impressed that I was certainly one of those for whom Jesus had prayed. The many men I had killed had been slaughtered in the name of patriotism, for I did not understand the love of Christ,” Fuchida wrote.

The two men became friends and Fuchida, the man who bombed Pearl Harbor, became an evangelist spreading the Good News around the globe – including America!

Redemption is a beautiful thing. Remember this – Good Friday is only good because of the one being executed on the cross. He is good and still leads men to repentance today!

Then Jesus said, “Father, forgive them, for they do not know what they do.” And they divided His garments and cast lots.
– Luke 23:34

TODAY IS A DAY OF HOPE! NO ONE IS TOO FAR GONE FOR THE LOVE OF JESUS TO SAVE. KEEP PRAYING, KEEP LOVING AND WATCH REPENTANCE COME TO THOSE YOU LOVE – AND SOME YOU USED TO HATE!