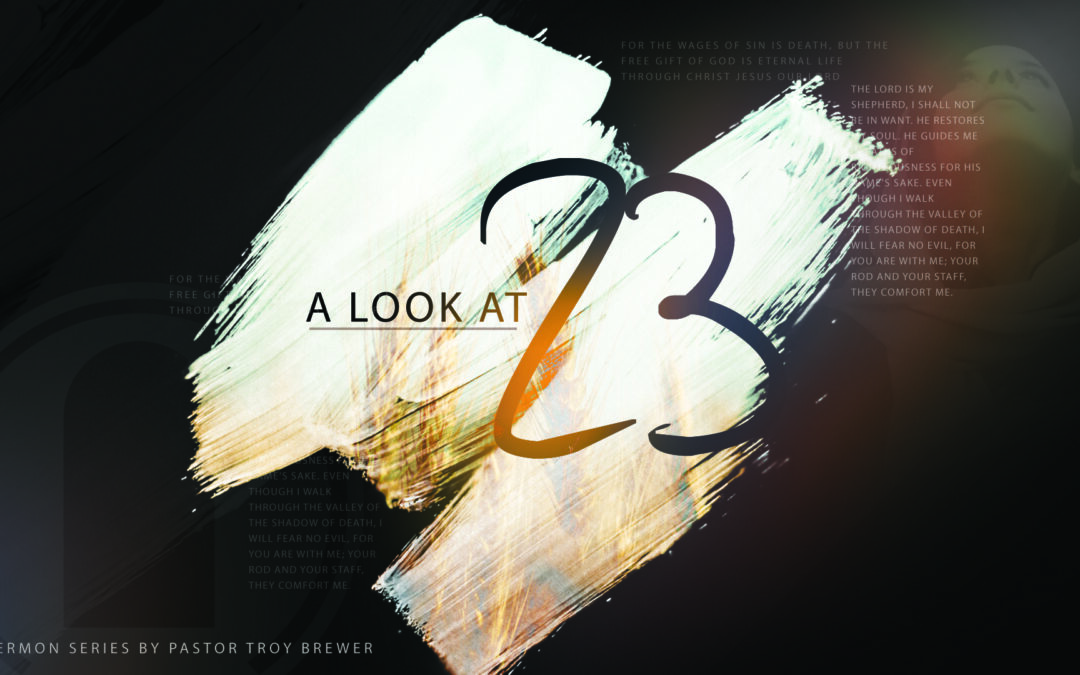 As previously discussed, numbers, measures and weights are parts of the language of heaven and many times are specific sermons or prophetic indicators of spiritual themes.

Literally everything God designs is embedded with a brilliant mathematical code – music, flowers, space – bible numeric appears to be God’s watermark of authenticity. It prevents counterfeiting.

“There can neither be works nor words without number. We can understand how man can act and speak without design or significance, but we cannot imagine that the great and infinite creator and redeemer could either work or speak without both his words and his works being absolutely perfect in every particular.”

The theme of 23 throughout scripture, history and science and the heavens is plainly stated: the subject of DEATH.

Our 23rd President, Benjamin Harrison, suffered the death of his wife during his presidency.

The Knights Templar had 23 Grand Masters.

In ancient Israel, every city had a local Sanhedrin counsel consisting of 23 judges.

In Islam, Muslims believe the Qur’an was revealed in a total of 23 years to Mohammed.

In the Bible, we have Psalms 23

Yea though I walk through the valley of the shadow of Death, I will fear no evil for you are with me…

Jude 23 – And others save with fear, pulling them out of the fire.

Proverbs 11:23 – The expectation of the wicked is wrath.

“Part of man’s curse is toil and labour,” occurring 23 times in the book of Genesis.

2 Kings 23:31, Jehoahaz was twenty and three years old when he began to reign…and did evil.

The certainty of Death

The enemy of Death

The penalty of Death

The only ONE who can conquer death is the Lord Jesus Christ.

DEATH MUST BE CONQUERED AND OVERCOME.

I am He that lives, and was dead; and, behold, I am alive for evermore, Amen; and have the keys of hell and of death.

Now Jesus has given us license to carry out His heart and his command to overcome death and Hell in every way and every place it claims to have dominion.

DEATH IS AN ENEMY!

The last enemy that will be destroyed is death.

When it comes to strike you, you stand in the resurrection power of King Jesus and cut its head off.

When James Dean introduced himself to actor Alec Guinness (think Obi Wan Kenobi from the first Star Wars movie) outside a restaurant in Los Angeles in 1955, he asked Guinness to take a look at the souped-up Porsche 550 Spyder he had named “Little Bastard.”

Guinness thought the car appeared “sinister” somehow and told Dean, “If you get in that car you will be found dead in it by this time next week.” The date was Sept. 23, 1955

Seven days later, James Dean died in a head-on collision with a 23-year-old Cal Poly student named Donald Turnupseed. Turnupseed crossed into Dean’s lane without seeing him. James Dean fans know the amazing actor with the tragic ending only starred in three movies before he died.

What most people don’t realize is that all three titles speak of rebellion and God’s enemies.

So he drove out the man; and he placed at the east of the garden of Eden cherubims, and a flaming sword which turned every way, to keep the way of the tree of life.

And Cain went out from the presence of the LORD, and dwelt in the land of Nod, on the east of Eden.

Rebel without a Cause

….and know that this city is a rebellious city, and hurtful unto kings and provinces, and that they have moved sedition within the same of old time: for which cause was this city destroyed.

It is interesting to me that in 1 Samuel 17, when the giant Goliath deﬁed the armies of Israel, David’s response to the giant’s blasphemy was:

Unlike David 3,000 years before him, this self-proclaimed “illegitimate” rebel was without a cause. That’s not a good testimony. I don’t know if it’s a word about him or a word about that generation, but God was speaking if you had an ear to hear in the mid-1950s.

For when you were slaves of sin, you were free in regard to righteousness. 21 What fruit did you have then in the things of which you are now ashamed? For the end of those things is death.

My dad is a big Texas History fan and it has spilled over to me. He has always been fascinated with the famous gangsters of the 1930s, Bonnie and Clyde, partly because they share a date on the calendar.

For my dad’s 60th birthday, I took him out to Gibsland, Louisiana for the historical 70th anniversary of their assassination by famed Texas Ranger, Frank Hammer. We got to hang out with actual family members, attend the historical meeting of published authors and hear first-hand accounts from surviving eyewitnesses.

At the end of the day they had a dramatic recreation of the ambush at the actual site using the car from the movie “Bonnie and Clyde.”

If you have never heard several fully automatic B.A.R.s go off at one time, I tell you, it’s really something to experience. More like an explosion than gunﬁre. That’s what one of the shooters said, too:

“You couldn’t hear any one shot. It was just a roar, a continuous roar, and it kept up for several minutes. We emptied our guns, reloaded, and kept shooting. No chances with Clyde and Bonnie.”

On April 13, 1933, newspapers all across the country published Bonnie’s prophetic poem. All America learned to quote it. Lengthy, it ended like this:

They know the law always wins

They’ve been shot at before, but they do not ignore

That death is the wages of sin.

Some day they’ll go down together

And they’ll bury them side by side

To few it’ll be grief, to the law a relief

But it’s death for Bonnie and Clyde.

On May 23, 1934, Bonnie and Clyde were shot to pieces in an ambush. According to newspapers, 23 people were arrested that day for harboring the fugitives. Bonnie was 23-years-old.

The bullet-riddled car of Bonnie and Clyde:

IT’S KNOWN AS THE DEATH CAR.

1934 Ford V8 it was stolen from the Warren family right out of their driveway in Topeka Kansas and when it was was returned to them IT HAS 167 BULLET HOLES IN IT.

Bonnie had 53 bullets in her and Clyde had 51

Death has to be dealt with the way Frank Hammer dealt with Bonnie and Clyde.

Romans chapter 1 lists the things within every human being that must not be tolerated because they all lead to death.

And even as they did not like to retain God in their knowledge, God gave them over to a reprobate mind, to do those things which are not convenient;

32 Who knowing the judgment of God, that they which commit such things are worthy of death, not only do the same, but have pleasure in them that do them

Implacable: used to describe (someone who has) strong opinions or feelings that are impossible to change: an implacable enemy; implacable hostility.

Kyle Reese from the terminator. It can’t be reasoned with. It doesn’t feel pity, remorse, or fear. And it absolutely will not stop, ever, until you are dead!”

Lord you can mold me and shape me.

Jesus you can change and transform me.

Implacable also falls into the category of never ever being satisfied or finished. Proverbs says there are four things that are never satisfied:

“The grave; and the barren womb; the earth that is not filled with water; and the fire that saith not, It is enough.”

Be filled with the Holy Spirit!

1. Jesus gives The Holy Spirit as your Helper.

“Nevertheless, I tell you the truth: it is to your advantage that I go away, for if I do not go away, the Helper will not come to you. But if I go, I will send him to you,”

When you are feeling powerless or tired or like your failing at life, you can have confidence as a believer that you’re not alone. You can start each day knowing the Holy Spirit is there to help you. He is the power that sustains, energizes, and keeps you on a holy path. Do not hesitate to invite Him in.

2. The Holy Spirit sanctifies you.

“But you were washed, you were sanctified, you were justified in the name of the Lord Jesus Christ and by the Spirit of our God,”

“Sanctified” means to be set apart as sacred. Essentially, it’s the purification of sin and spiritually maturing to become more Christlike. This is an important process for a believer–leaving behind the old and becoming a new person. But it’s a daily process, and it takes time.

The Holy Spirit wants to help you in this process of sanctification: to die to your old self and be all that God created you to be; to be free from the entanglement of sin and live victoriously.

“And we all, who with unveiled faces contemplate the Lord’s glory, are being transformed into his image with ever-increasing glory, which comes from the Lord, who is the Spirit,”

Moses experienced God’s glory on the mountaintop but we have communion with Him every day! Theologian Warren Wiersbe writes,

“Moses reflected the glory of God, but you and I may radiate the glory of God. When we meditate on God’s Word and in it see God’s Son, then the Spirit transforms us! We become more like the Lord Jesus Christ as we grow ‘from glory to glory.”

Our goal is Christlikeness and this takes place through the power of the Holy Spirit. While we focused on sanctification and the diminishment of sin in the previous point, this is rather a transformation into the image of Christ.

“May the God of hope fill you with all joy and peace in believing, so that by the power of the Holy Spirit you may abound in hope,”

Hope as God hopes. This is only possible in abundance through the power of the Holy Spirit. And it’s hope that carries people through all trials and tribulations. Hope is fuel for the soul. Tap into this by His power and experience peace among your surroundings.

…because the love of God has been poured out in our hearts by the Holy Spirit who was given to us.

We find love in our suffering. As we endure trials, God’s love is poured out into us through the Spirit and it’s this empowerment that carries you and I through the hard seasons. When you are doubting this love in your difficulty, remember that the Spirit pours it into your heart.

Christ in you is the Hope of Glory

Jesus Christ living in you through the power of the Holy Spirit is your answer to the 23 in me.

I declare in Jesus’ name that I am alive in Christ and dead to the world in 2023. The life of Christ will be on me. His resurrection power will flow through me, and goodness and mercy will follow me. The gates of hell will not prevail over my family or me, and I will see the goodness of the Lord in the land of the living. In Jesus’ name!