Presents for His Presence: A message on gifts for the King 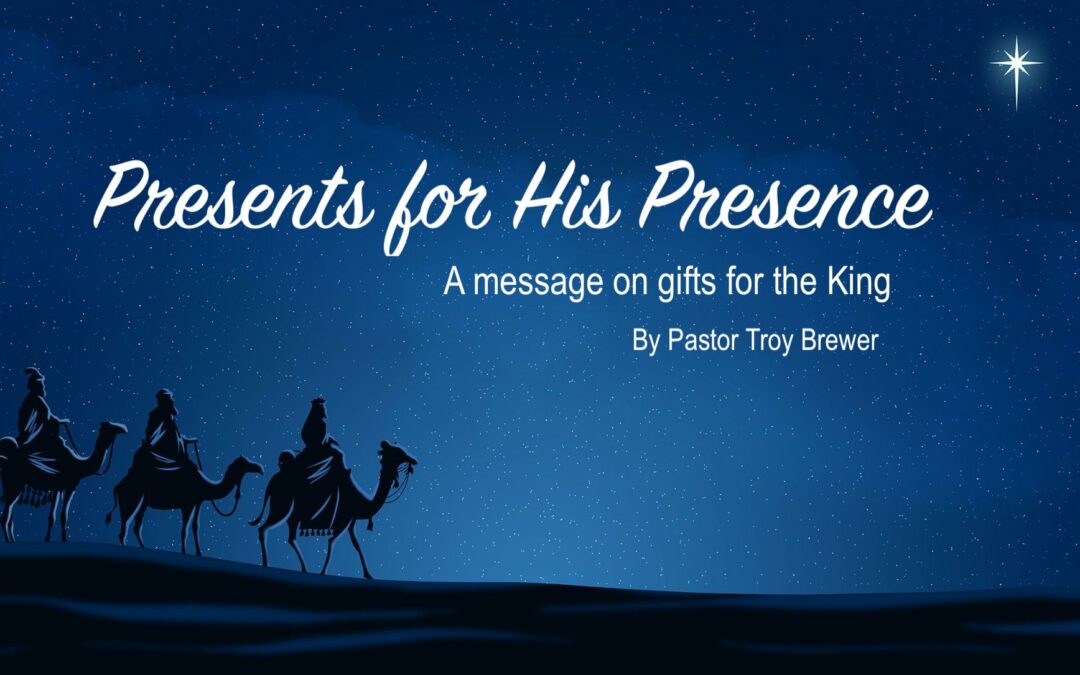 Meeting with Kings, Prime Ministers and Presidents, World famous CEOs and next-level generals in the body of Jesus.

Luke 7:36-48 – Then one of the Pharisees asked Him to eat with him. And He went to the Pharisee’s house, and sat down to eat.

37 And behold, a woman in the city who was a sinner, when she knew that Jesus sat at the table in the Pharisee’s house, brought an alabaster flask of fragrant oil,

39 Now when the Pharisee who had invited Him saw this, he spoke to himself, saying, “This Man, if He were a prophet, would know who and what manner of woman this is who is touching Him, for she is a sinner.”

40 And Jesus answered and said to him, “Simon, I have something to say to you.”

41 “There was a certain creditor who had two debtors. One owed five hundred denarii, and the other fifty. 42 And when they had nothing with which to repay, he freely forgave them both. Tell Me, therefore, which of them will love him more?”

43 Simon answered and said, “I suppose the one whom he forgave more.”

And He said to him, “You have rightly judged.” 44 Then He turned to the woman and said to Simon, “Do you see this woman? I entered your house; you gave Me no water for My feet, but she has washed My feet with her tears and wiped them with the hair of her head.

45 You gave Me no kiss, but this woman has not ceased to kiss My feet since the time I came in. 46 You did not anoint My head with oil, but this woman has anointed My feet with fragrant oil. 47 Therefore I say to you, her sins, which are many, are forgiven, for she loved much. But to whom little is forgiven, the same loves little.”

Simon the Leper ? Simon the Pharisee

Her sins were forgiven.

He was not healed.

In Kingdom protocol, titles and gifts mean qualification for partnering with the King’s business at a high level.

When you come into the presence of the King, sarcasm and ill reverence goes out the door.

If the King comes to meet you, that’s one thing. If you go to meet the King, it’s another thing.

WHEN YOU ARE INVITING THE KING TO SHOW UP IN YOUR LIFE OR YOUR CIRCUMSTANCES, YOU HAVE TO KNOW HOW TO TREAT HIM OR YOU ARE DISQUALIFIED FOR YOUR MIRACLE.

Simon the Leper, or Simon the Pharisee, is such a great example.

Protocol: the official procedure or system of rules governing affairs of state or diplomatic occasions.

WHEN ESTHER BARGED INTO THE THRONE ROOM OF KING XERXES, SHE DID SO KNOWING  SHE WOULD PROBABLY DIE A HORRIBLE DEATH, BUT THERE WAS A TINY CHANCE HER FAVOR WITH THE KING COULD HELP HER SAVE GOD’S PEOPLE.

Esther 7:10 (NKJV) – “So they hanged Haman on the gallows that he had prepared for Mordecai.”

However consider the NIV’s take on the text:

Hebrew word “xulon” is the most often translated in the Bible as “tree,” “piece of wood,” or “pole.” The only examples of the word being translated as “gallows” appear in the Book of Esther and only in translations which have that image predetermined in the mind of the translators.

The Hebrew word תָּלָה talah is used here and is the source of complexity in interpreting the image of death. The word translates most often in the Bible to mean “suspend” or “hang.”

The point, pardon the pun, is that you don’t break protocol.

….but they must not appear before the LORD without a gift for him.

Proverbs 18:16 – A man’s gift makes room for him, and brings him before great men.

We have rescued more than 10,000 boys and girls out of sexual slavery

The divine nature of God: The fear of the Lord

2. Honor the Lord your God with all your might–muchness–all your material possessions.

1. Extraordinarily expensive. At today’s prices, frankincense was worth $500 per pound.

2. Comes from a tree that is tapped and drained.

3. Comes from southern Arabia. Queen of Sheba brought gold and frankincense to Solomon. It is very rare.

4. Frankincense was the key ingredient in the incense for temple offerings.

6. Every morning and evening Aaron burned Frankincense before the Lord–before the holy of holies.  There was a whole room in the temple of Jerusalem where the Frankincense was stored. It was considered Holy. It was only used in service to the Lord.

7. Not used as perfume. It was forbidden to be used in common ways.

8. In all the offerings–not the sin offerings–but the fellowship offerings–the thanksgiving offerings. Love the Lord with all your Heart!! Worship of the heart!!

Revelation 5:8 – And when he had taken the scroll, the four living creatures and the twenty-four elders fell down before the Lamb, each holding a harp, and golden bowls full of incense, which are the prayers of the saints. And they sang a new song, saying, “Worthy are you to take the scroll and to open its seals, for you were slain, and by your blood you ransomed people for God from every tribe and language and people and nation, and you have made them a kingdom and priests to our God, and they shall reign on the earth.”

The prayers of the saints.

Your prayers and thanksgiving are your Frankincense.

Psalm 141:2 (prayer and praise as incense) – Let my prayer be counted as incense before you, and the lifting up of my hands as the evening sacrifice!

Great care and skill with the incense – great Worship

Matthew 4:8 – Again, the devil took him to a very high mountain and showed him all the kingdoms of the world and their glory. And he said to him, “All these I will give you, if you will fall down and worship me.” Then Jesus said to him, “Be gone, Satan! For it is written, “‘You shall worship the Lord your God and him only shall you serve.’”

When Jesus was tempted, Jesus said you must worship the Lord alone.

1. A very rare spice also comes from a tree.

2. The most important perfume and spice of Biblical times.

3. Also mixed with olive oil for the anointing of Kings. It could be turned into a powder and worn by women as a perfume.

4. but also used as a pain killer. Jesus was offered a drink spiced with myrrh – hanging on a cross.

5. This gift that the wisemen brought him was prophetic of his coming death.

6. John 19:39, Myrrh was used in the spices that the women prepare to anoint his body with for burial. It speaks of his death and burial.

It was costly–more than gold. At today’s prices, a pound of myrrh would cost $4,000.

7. It was an alabaster jar full of myrrh that a devoted woman came and broke and anointed Jesus feet with it – so costly that it was equivalent to half a year to a year’s wages.

Myrrh is the fragrance that rises from the believer who is living in the life of the resurrected Christ.

MYRRH – THE DEATH OF JESUS CHRIST

Mark 15:23 – Then they gave Him wine mingled with myrrh to drink, but He did not take it.

Why did Jesus refuse? He had already drunk his covenant cup of wine with his disciples at the last supper proclaiming himself to be the bridegroom. He promised he would not drink of it again until he drank the second cup of covenant with them (and us) at the Marriage Supper of the Lamb.