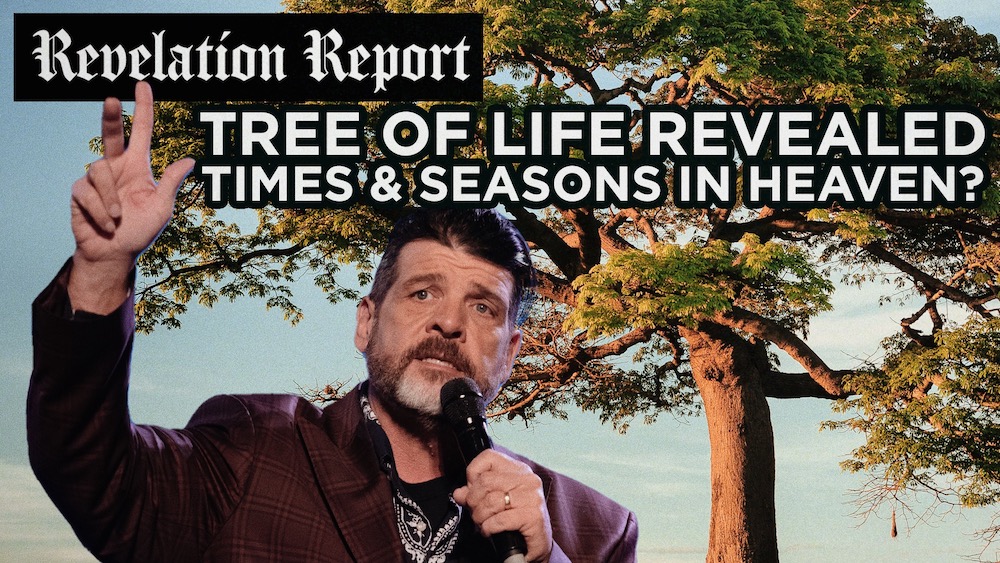 FOR THOSE IN TIMING WITH THE LORD:

Revelation 22:1-3 – (The River of Life) And he showed me a pure river of water of life, clear as crystal, proceeding from the throne of God and of the Lamb. 2 In the middle of its street, and on either side of the river, was the tree of life, which bore twelve fruits, each tree yielding its fruit every month. The leaves of the tree were for the healing of the nations. 3 And there shall be no more curse, but the throne of God and of the Lamb shall be in it, and His servants shall serve Him.

TISHREI – THE HEAD OF THE YEAR
Tishrei is the first (1= unity) month on any Jewish calendar, but the Torah consistently refers to it as the seventh (7= fullness, completion, the end of a time period) month, not the first. This disparity is caused by two different calendars. One begins with Creation, what Jews see as the most central event to ever take place. They therefore unhesitatingly call it the first month.
God sees it from an entirely different angle. To Him, the most significant moment in time was the Exodus from Egypt, which opened up the door for the Jews to accept His word as their guide. This is why Nissan, the month in which the Exodus took place, is referred to consistently in the Torah as “the first month.” According to this way of counting, Tishrei is the seventh month of the year.

CHESHVAN – NEW BEGINNINGS
Cheshvan is the second (perfect witness, godly division) month of the Jewish civil calendar counting from Rosh Hashanah and the eighth (new beginnings) month from Nissan, the beginning of the Jewish religious calendar. Cheshvan is the only month with no holidays or feasts. It is a time to move forward into the new year with a fresh zeal from the Days of Awe. Cheshvan is “reserved” for the time of the Messiah, who will inaugurate the Third Temple in the month of Cheshvan.
The great flood in the days of Noah began in Cheshvan 21. One year later on Cheshvan 27, Noah left the ark.

KISLEV – A CELEBRATION OF LIGHT
Kislev is the third (perfect completion, fullness, resurrection, divinity) month on the Jewish civil calendar and the ninth (+ fruit-bearing – judgment over death) month on the Jewish religious calendar. Best known for the holiday of Chanukah (Hanukkah) the eternal power of light over darkness, good over evil. Commemorating the miraculous victory of a small Jewish army led by the Maccabees over the mighty Syrian-Greek empire, Chanukah celebrates the miracle of the oil. When the Jews sought to light the Temple menorah after the war, they found only one small jug of pure oil. Miraculously, the one-day supply burned for eight. During the eight-day festival of Chanukah, Jews worldwide kindle the menorah nightly.

TEVET – GOODNESS AND MERCY SHALL FOLLOW
Tevet is the fourth (creation, the world) month on the civil calendar and the tenth (perfect order, timelines, carrying out God’s plan) month on the Jewish religious calendar. Its name, mentioned in the book of Esther, was acquired in Babylon and shares a root with the Hebrew word tov, meaning “good.” Tevet begins with the last days of Chanukah. By embracing the ever-increasing light of the menorah—the power of good over evil—we are able to reveal the good hidden in our lives and world around us.
Tevet 10 is a fast day commemorating the start of the siege of Jerusalem, which led to the destruction of the First Temple two-and-a-half years later on the ninth of Av. This fast is a cry for God’s mercy, the promise of the end of exile and the coming of the Messiah.

SHEVAT – MAN IS A TREE OF FIELD
Shevat is the fifth (grace) month on the civil calendar and the eleventh (+ heroes rising – judgment over chaos) month on the Jewish religious calendar counting from Nissan. The high point of the month is the holiday “New Year for Trees.” This is the day when the sap begins to rise in the fruit trees in Israel—the start of a new growing season. Jews mark the day by eating fruit, particularly the “Seven Kinds” with which Israel is blessed – wheat, barley, grapes, figs, pomegranates, olives and dates. On this day, they remember “Man is a tree of the field.”

ADAR – DELIVERANCE, JUSTICE AND JOY
Adar is the sixth (man, flesh) month on the Jewish civil calendar and the twelfth (God’s perfect government) on the Jewish religious calendar. “When Adar enters, joy increases,” the Talmud says. This reaches its climax on the 14th of the month, as the Jews celebrate Mordechai and Esther’s triumph over the wicked Haman– a supernatural season of justice.

NISSAN – BEGINNINGS AND FULFILLMENT
According to the Torah, Nissan is the seventh (perfection, fullness, end of cycle) month on the Jewish civil calendar and the first (unity) on Jewish religious calendar. On the first day of Nissan in the year 2448 from creation (1313 BCE), two weeks before the Exodus, God showed Moses the crescent new moon, instructing him regarding the setting of the Jewish calendar. “This month shall be for you the head of months, the first of the months of the year” (Exodus 12:2). This ushered in the first Jewish month and the religious lunar calendar that Jews have followed ever since. According to Rabbi Jonathan Cahn, Jesus was born and died on Nissan 1, His life making a complete circuit fulfilling the feast of Passover.

IYAR – A TIME OF HEALING
Iyar is the eighth (new beginnings) month on the Jewish civil calendar and the second (prefect witness, godly division) month on the religious calendar counting from Nissan. Every day Iyar is included in the Omer counting – the 49 days between Passover and Shavuot (Pentecost).This is a period of introspection as the Jews prepare to receive the Torah anew on Pentecost.
During the Exodus, the Israelites reached a well of bitter water. Moses cast a tree into it and it miraculously became sweet. God then promised if Israel followed Him, “the diseases I have placed on Egypt I will not place upon you, for I am God your Healer.” I-Y-A-R spells the Hebrew word for healing.

SIVAN – GOD WITHIN US
Sivan is the ninth (+ fruit bearing – judgment over death) month on the Jewish civil calendar and the third (perfect completion, fullness, resurrection, divinity) month on the religious calendar. During Sivan, the Jewish people arrived and camped at Mount Sinai (Exodus 19:2). The Hebrew word for “camped” is the verb “vayichan.” Singular, it describes how the entire people camped “as one person, with one heart,” expressing true unity.
In the month of Sivan, the Jews celebrate the Feast of Shavuot, or Pentecost, when the Torah was given by God to the Jewish people on Mount Sinai. Jesus fulfilled this feast in the book of Acts as the 120 in the upper room were indwelled and filled with the Holy Spirit.

TAMMUZ – AND A TIME TO MOURN…
Tammuz is the tenth (perfect order, timelines, carrying out God’s plan) month on the Jewish civil calendar and the fourth (creation, the world) on the religious calendar. The 17th day of Tammuz—a fast day that commemorates when the walls of Jerusalem were breached by the Romans (in 69 C.E.)—marks the beginning of a period known as “The Three Weeks.” This is a mourning period when Jews lament the destruction of the Holy Temple.

AV – YOUR FATHER AND COMFORTER
Av, which means “father” is the eleventh (+heroes rising – judgment over disorder) month on the Jewish civil calendar and the fifth (grace) month on the religious calendar. It is customary to add the name “Menachem,” which means “comforter” or “consoler” – Father who comforts.
America has a 9/11 and so does Israel. On the ninth day of the eleventh Hebrew month, both Temples were destroyed and many other tragedies occurred. Yet our Father in heaven is there to comfort and console them. Av is also the date of a “low point” on the Jewish calendar—the day of the sin of the spies.

ELUL – I AM MY BELOVED’S AND HE IS MINE
As the last month of the Jewish civil year, Elul is traditionally a time of introspection to review one’s deeds and spiritual progress over the past year – as well as prepare for the upcoming “Days of Awe” of Rosh Hashanah and Yom Kippur. As the month of “divine mercy and forgiveness,” it is a time to ready as the bride of Christ, looking to the Rapture of the Church and the Marriage Supper of the Lamb.

WHY WILL BE KEEP THE FEASTS FOREVER?

Ecclesiastes 3:11 – He has made everything beautiful in its time. Also He has put eternity in their hearts, except that no one can find out the work that God does from beginning to end.

EVEN DURING THE MILLENNIAL REIGN…

FEASTS ARE A PERMANENT ORDINANCE

WHY DO WE KEEP THE FEASTS, THE SEASONS AND HIS TIMING EVEN IN ETERNITY? BECAUSE THEY BELONG TO THE LORD!

Leviticus 23:2 – “Speak to the children of Israel, and say to them: ‘The feasts of the Lord, which you shall proclaim to be holy convocations, these are My feasts.

FEASTS ARE ABOUT FRUIT! OTHER EXAMPLES OF FRUIT IN THE WORD:

Galatians 5:22-23 – But the fruit of the Spirit is love, joy, peace, longsuffering, kindness, goodness, faithfulness, gentleness, self-control. Against such there is no law.

Song of Solomon 4:13-14 – Your inward life is now sprouting, bringing forth fruit. What a beautiful paradise unfolds within you. When I’m near you, I smell aromas of the finest spice, for many clusters of my exquisite fruit now grow within your inner garden. Here are the nine: pomegranates of passion, henna from heaven, spikenard so sweet, saffron shining, fragrant calamus from the cross, sacred cinnamon, branches of scented woods, myrrh, like tears from a tree, and aloe as eagles ascending.