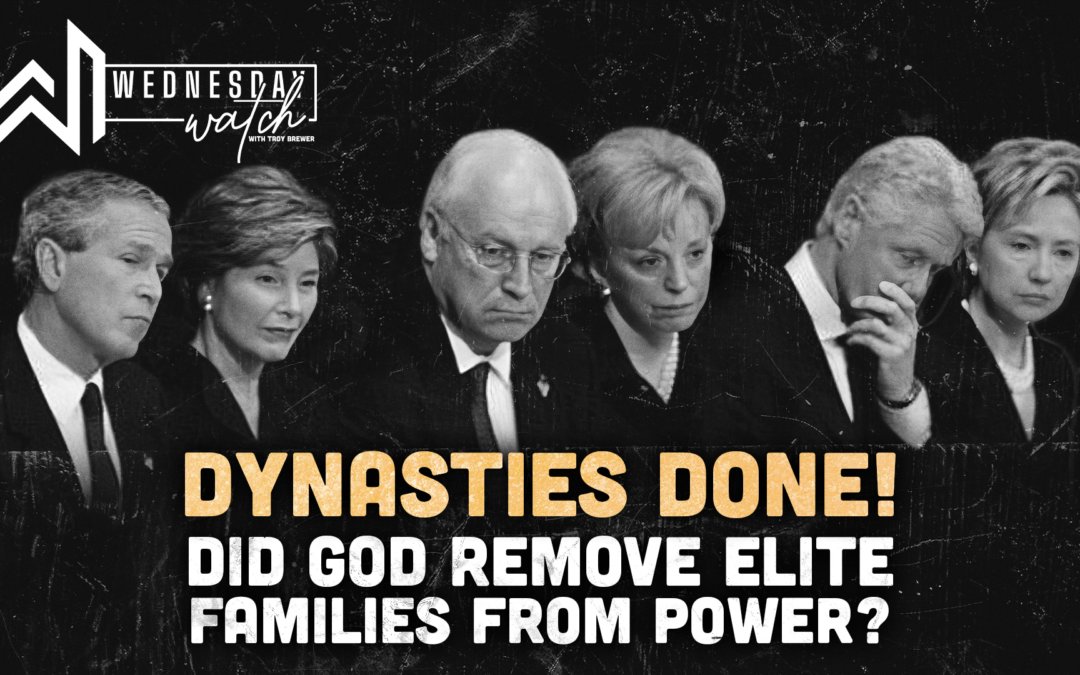 DYNASTIES DONE! This screenshot by Charlie Kirk is wildly prophetic.

The 23rd time Noah is mentioned

Genesis 7:23 – Thus He blotted out every living thing that was upon the face of the land, from man to animals to creeping things and to birds of the sky, and they were blotted out from the earth; and only Noah was left, together with those that were with him in the ark.

The 23rd time Jacob is mentioned, Esau is planning to kill him.

Genesis 27:42 – Now when the words of her elder son Esau were reported to Rebekah, she sent and called her younger son Jacob, and said to him, “Behold, your brother Esau is consoling himself concerning you, by planning to kill you.”

The 23rd time Israel (Jacob) is mentioned, he has given Joseph instructions where to bury him, then dies.

The 23rd time Joshua is mentioned is connected to Moses’ death.

Deuteronomy 31:14 – Then the Lord said to Moses, “Behold, the time for you to die is near; call Joshua, and present yourselves at the tent of meeting, that I may commission him.”

Luke 23:23 – But they were insistent, demanding with loud voices that He be crucified. And the voices of these men and of the chief priests prevailed.

THE DATE OF THE OPENING OF THE NEXT CONGRESS

1/20/2023has another death in it as well as a 1 for unity and 20:20 – which is about wisdom in hindsight and clear perfect vision moving forward.

Romans 1:20 – For since the creation of the world His invisible attributes are clearly seen, being understood by the things that are made, even His eternal power and Godhead, so that they are without excuse

Proverbs 20:23 – Diverse weights are an abomination to the Lord, and dishonest scales are not good.

Leviticus 20:23 – And you shall not walk in the statutes of the nation which I am casting out before you; for they commit all these things, and therefore I abhor them.

FIRST TIME IN 55 YEARS THESE FAMILIES WILL NOT BE IN POWER:

5 is grace in Hebrew

5 is death to Luciferians (opposite of God’s word)

55 is double death for them and double grace for us!

29 – Mountains, influence – there it is again

Genesis 11:28 – And Haran died before his father Terah in his native land, in Ur of the Chaldeans.

Bush and Cheney both Republicans.

THIS FIGHT IS NOT ABOUT LEFT OR RIGHT, DEMOCRAT OR REPUBLICAN!

THE FIGHT IS ABOUT GOOD VS. EVIL, HEAVEN VS. HELL

These people were anointed to lead and be a light to the people. Instead, they did just the opposite. They led people astray and built power for themselves by partnering with the wrong spirit – the spirit of the fallen angels – Watchers or “sons of God” – in Psalms 82.

God stands in the congregation of the mighty; He judges among the gods.

2 How long will you judge unjustly, And show partiality to the wicked? Selah

3 Defend the poor and fatherless; Do justice to the afflicted and needy.

4 Deliver the poor and needy; Free them from the hand of the wicked.

5 They do not know, nor do they understand; They walk about in darkness;

All the foundations of the earth are unstable.

6 I said, “You are gods, And all of you are children of the Most High.

8 Arise, O God, judge the earth; For You shall inherit all nations.

CLINTON – Settlement on a hill

39 Again He went away and prayed, and spoke the same words. 40 And when He returned, He found them asleep again, for their eyes were heavy; and they did not know what to answer Him.

41 Then He came the third time and said to them, “Are you still sleeping and resting? It is enough! The hour has come; behold, the Son of Man is being betrayed into the hands of sinners. 42 Rise, let us be going. See, My betrayer is at hand.”

(Betrayal and Arrest in Gethsemane) 43 And immediately, while He was still speaking, Judas, one of the twelve, with a great multitude with swords and clubs, came from the chief priests and the scribes and the elders. 44 Now His betrayer had given them a signal, saying, “Whomever I kiss, He is the One; seize Him and lead Him away safely.”

Numbers 14:38-44 – But Joshua the son of Nun and Caleb the son of Jephunneh remained alive, of the men who went to spy out the land.

(A Futile Invasion Attempt) 39 Then Moses told these words to all the children of Israel, and the people mourned greatly. 40 And they rose early in the morning and went up to the top of the mountain, saying, “Here we are, and we will go up to the place which the Lord has promised, for we have sinned!”

41 And Moses said, “Now why do you transgress the command of the Lord? For this will not succeed. 42 Do not go up, lest you be defeated by your enemies, for the Lord is not among you. 43 For the Amalekites and the Canaanites are there before you, and you shall fall by the sword; because you have turned away from the Lord, the Lord will not be with you.”

44 But they presumed to go up to the mountaintop. Nevertheless, neither the ark of the covenant of the Lord nor Moses departed from the camp.

Psalm 57 (Prayer for Safety from Enemies)

To the Chief Musician. Set to “Do Not Destroy.” A Michtam of David when he fled from Saul into the cave.

For my soul trusts in You;

And in the shadow of Your wings I will make my refuge,

Until these calamities have passed by.

2 I will cry out to God Most High,

To God who performs all things for me.

3 He shall send from heaven and save me;

He reproaches the one who would swallow me up. Selah

God shall send forth His mercy and His truth.

4 My soul is among lions;

I lie among the sons of men

Who are set on fire,

Whose teeth are spears and arrows,

And their tongue a sharp sword.

5 Be exalted, O God, above the heavens;

Let Your glory be above all the earth.

6 They have prepared a net for my steps;

My soul is bowed down;

They have dug a pit before me;

Into the midst of it they themselves have fallen. Selah

I will sing and give praise.

I will awaken the dawn.

9 I will praise You, O Lord, among the peoples;

I will sing to You among the nations.

10 For Your mercy reaches unto the heavens,

And Your truth unto the clouds.

11 Be exalted, O God, above the heavens;

Let Your glory be above all the earth.

THE REDEEMED VERSION OF 23 IS RESURRECTION!

Hebrew letters: kaph-gimel. These signify the open palm in the act of lifting up—in this case, lifting up from death

Human cells have 23 pairs of chromosomes (46)

The average human biorhythm is 23 days

23 days for blood to circulate fully through the human body

Genesis 1:23 – So the evening and the morning were the fifth day.

God announces he will send his son to redeem mankind

Matthew 1:23 – “Behold, the virgin shall be with child, and bear a Son, and they shall call His name Immanuel,” which is translated, “God with us.”