REVELATION REPORT: CRYPTO CRAZY! Is the One World Currency here? 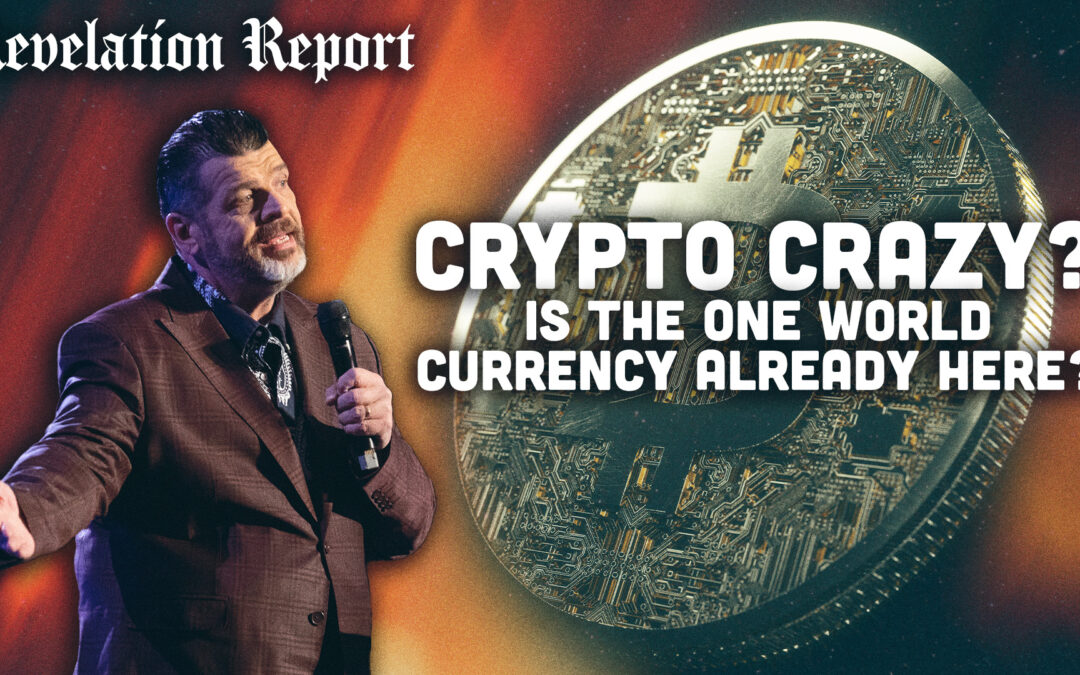 It seems the whole world these days is crazy about crypto currency. So what is it and how does digital currency fit in with the book of Revelation and end time prophecy?

WHAT IS CRYPTO CURRENCY?

Created in 2009, BITCOIN is the most popular cryptocurrency.

• Creator carefully regulates how many new bitcoins will be “minted”

• The number decreases by half every four years.

• Only 21 million bitcoins will be available.

Remember, independent crypto cuts out the third party and can be exchanged anonymously.

This is the opposite of the Beast System of total control during the Tribulation period.

FORERUNNER SEASONS: LOOK AT THE GAS PUMP, THE GROCERY RECEIPT OR THE NEWS. LIKE WE SAID LAST WEEK, WE HAVE ENTERED A FORERUNNER BLACK HORSE SEASON OF HYPER INFLATION AS WORLD ECONOMIC SYSTEMS ARE BEING PURPOSELY CRASHED BY GLOBAL ELITES AND LARGE CORPORATIONS WITH THE HELP OF OUR OWN GOVERNMENTS.

Revelation 13:16-18 – He causes all, both small and great, rich and poor, free and slave, to receive a mark on their right hand or on their foreheads, 17 and that no one may buy or sell except one who has the mark or the name of the beast, or the number of his name.18 Here is wisdom. Let him who has understanding calculate the number of the beast, for it is the number of a man: His number is 666.

THIS IS THE ONLY TIME IN WORLD HISTORY WHEN A SINGLE GLOBAL CURRENCY IS ACTUALLY POSSIBLE!

HOW? DIGITAL MONEY MUST BE TRANSFERRED IN REAL TIME AROUND THE GLOBE. IT CAN BE TRACKED, TURNED OFF AND ON AND USED TO CONTROL THE MASSES OR THE INDIVIDUAL.

IS CRYPTO CURRENCY PART OF THE BEAST ECONOMIC SYSTEM? LISTEN TO WHAT ONE OF THE MOST INFLUENTIAL PEOPLE IN THE AMERICAN ECONOMIC SYSTEM HAD TO SAY AT THE 2022 WORLD GOVERNMENT SUMMIT.

SHE’S SAYING THE QUIET PART OUT LOUD. THIS IS ALL UNDERWAY.

Over 30 central banks are RIGHT NOW devising plans to issue their own crypto currency for their nation to replace cash.

BUT FIRST – THERE NEEDS TO BE A SYSTEM OR CRYPTOCURRENCY THAT THE ELITES CAN EASILY MANIPULATE. THEY NEED TO GET CONTROL OF THE CURRENT, INDEPENDENT SYSTEMS.

ONE CURRENCY SEEMS TO BE THE FRONTRUNNER FOR THE WORLD CENTRALIZED BANK ONE WORLD CURRENCY.

XRP, OWNED BY A COMPANY NAMED RIPPLE, IS THE LEAD CANDIDATE FOR THE WORLD CENTRALIZED BANK ONE WORLD CURRENCY. CHECK OUT THEIR PAGE ON THE WORLD ECONOMIC FORUM WEBSITE. (GRX RIPPLE)

XRP IS IMMEDIATE, WHICH IS NECESSARY FOR A GLOBAL CURRENCY BASED ON TOTAL CONTROL – OR BLOCKCHAIN. RIPPLE CALLS THIS “THE INTERNET OF VALUE.”

THE TRADEMARK REGISTRATION FOR XRP, FILED IN AUGUST 2017, WAS REGISTERED BY DALYA ROTHSCHILD.

IS SHE PART OF THE MYSTERIOUS ROTHSCHILDS FAMILY WHO LITERALLY RUN THE WORLD? WE’RE NOT SURE, BUT IT IS CURIOUS.

RIPPLE HAS A CLOSE RELATIONSHIP WITH THE WORLD ECONOMIC FORUM– THE ARCHITECTS OF THE “GREAT RESET” WHERE YOU WILL OWN NOTHING AND LIKE IT.

MANY OF THE WORLD’S ELITES, INCLUDING THE GATES FOUNDATION, HAVE INVESTED HEAVILY IN XRP OR HAVE BUILD FINANCIALLY BENEFICIAL PARTNERSHIPS WITH THE CRYPTO CURRENCY.

RIPPLE HAS PARTNERSHIPS WITH THE WORLD ECONOMIC FORUM AND GLOBAL BANKING SYSTEMS – INCLUDING THE FEDERAL RESERVE.

RIPPLE CEO BRAD GARLINGHOUSE WAS A KEYNOTE SPEAKER AT DAVOS 2022 – THE ONLY CRYPTO CURRENCY REPRESENTATIVE TO GET THAT PLATFORM.

FOR MORE ON XRP, CHECK OUT THE KWAK BROTHERS VIDEO LINK BELOW IN DESCRIPTION BOX

LET’S TAKE A PROPHETIC LOOK AT XRP THROUGH GREEK GEMATRIA. THE NEW TESTAMENT AND BOOK OF REVELATION WERE WRITTEN IN GREEK.

Genesis 28:8 – Also Esau saw that the daughters of Canaan did not please his father Isaac.

Esau had no value for his godly inheritance and sold it to his brother. He is the only person in scripture God said he “despised.”

Matthew 23:6 – They love the best places at feasts, the best seats in the synagogues,

JESUS CALLS OUT THE HYPOCRISY OF FALSE RELIGIOUS LEADERS!

The letters X (CHI) and P (RHO) are used as another symbol for Christ. (GRX XR)

THE ADDITION OF PI – WHICH FINDS THE CIRCUMFERENCE OF A CIRCLE BY CUTTING IT IN HALF, COULD BE SEEN AS A SYMBOL OF CUTTING THE WORLD’S POPULATION IN HALF, AMONG OTHER THINGS.

XR – ChiRon – Chiron, a centaur in Greek mythology, is the son of the Titan Cronus and Philyra, an Oceanid or sea nymph. Chiron lived at the foot of Mount Pelion in Thessaly. Unlike other Centaurs who were violent and savage, he was famous for his wisdom and knowledge of medicine (imagine that?). He was known as the oldest, wisest and most just of all centaurs (halfbreed nephilim – Horse DNA).

The job of the Sons of God, or Watchers, was to bring wisdom and justice to mankind. They failed miserably.

Chiron is classified as a centaur, the first of a class of objects orbiting between the outer planets. Chiron is a between Saturn and Uranus.

SATURN IS ROMAN NAME FOR SATAN. THE WORLD ELITES ARE TRYING TO RAISE HIM FROM THE ABYSS ALONG WITH HIS SON, APOLLO – APOLLYON (THE DESTROYER AKA ABADDON IN HEBREW)

Uranus is the 7th planet from the sun and represents fullness and the Spirit of God.

ARE WE READY FOR THE NEW WORLD ORDER?

Kwak Brothers: Why are the Elites buying up this CryptoCurrency