REVELATION REPORT: THE MYSTERY OF THE FALSE PROPHET – The One World Religion Isn’t Near–It’s Here! 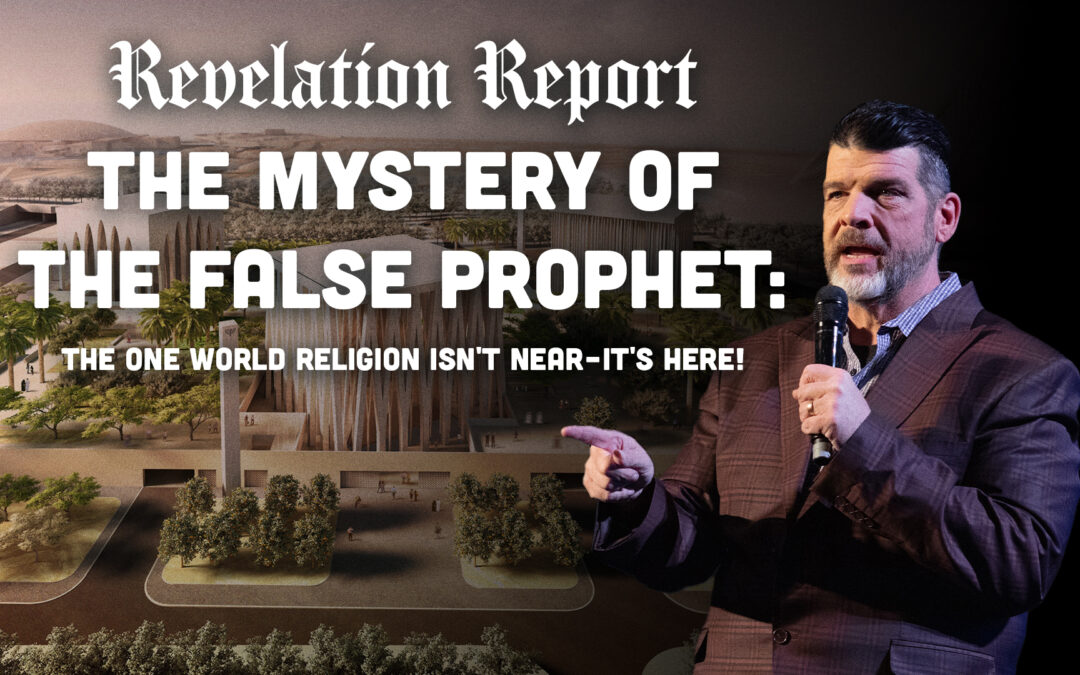 One of the biggest prophetic signs of the end of days happened just before Christmas and, just like the first time Jesus came to planet earth, everybody missed it.

Everyone, but a few crazies here in Texas!

Dec. 21, the Temple Mount Society announced at Freedom Church in Carrollton, Texas that it had found its prophesied red heifer. In fact, they have 22 fully red heifers, all from the great state of Texas bred by cattle ranchers that love Israel. (GRX HEIFER 1-5 throughout next two paragraphs)

So, what’s the big deal about a fully red heifer and why is it an end times sign?

The Jews need a fully red heifer (only two black or white hairs on its entire body) so they can use its ashes to cleanse the Temple Mount and the people as the law states in Numbers chapter 19. Once that is done, the Jews will build the long awaited 3rd Temple—the house of prayer for the nations that Jesus predicted in Matthew 21:13.

2,000 years since the Temple was razed by Nero.

Temple Mount Society has been planning for the Third Temple ever since Israel became a nation again in 1948. THEIR GOAL IS TO MAKE THE TEMPLE A HOUSE OF PRAYER FOR THE NATIONS—

JUST BEEN WAITING ON THE RED HEIFER, WHICH THEY NOW HAVE!

Remember, the Anti-Christ needs a temple to desecrate!

Their leading candidate is 4 months old. When she turns three, she will fulfill her role. That gives us a little time…

BUT WAIT! THE DEVIL’S OWN RIPOFF OF THE JEW’S THIRD TEMPLE “HOUSE OF PRAYER FOR THE NATIONS” IS ALREADY BEING UNVEILED AND YOU’LL NEVER GUESS WHO IS BEHIND IT….

Pope Francis, the 266th pope of the Holy Roman Empire, has unveiled what he calls the “ABRAHAMIC FAMILY HOUSE” in Abu Dhabi, the capitol of the United Arab Emirates. (GRX ABRAHAMIC HOUSE 1)

DUE TO OPEN IN 2022, THE ABRAHAMIC FAMILY HOUSE IS ALREADY BEING CALLED THE SEAT OF THE “ONE WORLD RELIGION” (GRX ABRAHAMIC HOUSE 2)

With a goal to bring international peace, understanding, and brotherhood to the world’s three religions that all sprang from Abraham, the Abrahamic House is being billed as a place of tolerance.

The names of the three houses of worship:

This has been in the works since February 2019, outline in the pope’s “Document on Human Fraternity”

“VICAR OF THE SON OF GOD”

Revelation 13:11-18  –The Beast from the Earth – False Prophet (Daniel’s “little horn” Daniel 7:21-25) Then I saw another beast coming up out of the earth, and he had two horns like a lamb and spoke like a dragon. 12 And he exercises all the authority of the first beast in his presence, and causes the earth and those who dwell in it to worship the first beast (anti-Christ), whose deadly wound was healed. 13 He performs great signs, so that he even makes fire come down from heaven on the earth in the sight of men. 14 And he deceives those who dwell on the earth by those signs which he was granted to do in the sight of the beast, telling those who dwell on the earth to make an image to the beast who was wounded by the sword and lived. 15 He was granted power to give breath to the image of the beast, that the image of the beast should both speak and cause as many as would not worship the image of the beast to be killed. 16 He causes all, both small and great, rich and poor, free and slave, to receive a mark on their right hand or on their foreheads, 17 and that no one may buy or sell except one who has the mark or the name of the beast, or the number of his name.18 Here is wisdom. Let him who has understanding calculate the number of the beast, for it is the number of a man: His number is 666.

MEANING OF VICAR IS NOT PASTOR: “SUBSTITUTE”

The “Substitute of Christ” – blasphemy!

Vatican: Oracle”Divining Serpent:” derived from Vatis = Diviner and Can = Serpent

Check out what is behind the Pope’s throne in the great meeting Hall: (GRX Resurrection 1 & 2)

Statue is called “The Resurrection of Christ” and depicts a disfigured Jesus rising out of the crater of a nuclear bomb.

THE SEVERING OF PERFECT RELATIONSHIP WITH GOD: MANS UTTER NAKEDNESS

Genesis 3:10 – So he said, “I heard Your voice in the garden, and I was afraid because I was naked; and I hid myself.”

THE REDEMPTION OF GENESIS 3:10! THE SECOND ADAM WITHSTANDS TEMPTATION AND REPAIRS THE DIVIDE!

Matthew 4:1 (Satan Tempts Jesus) – Then Jesus was led up by the Spirit into the wilderness to be tempted by the devil.

HERE’S THE REALLY CREEPY PART, IF YOU CUT THIS STATUE IN HALF AND YOU PUT A MIRROR UP TO IT, THIS IS THE IMAGE YOU GET:(GRX: RESURRECTION MIRROR 1)

NOT ONLY DOES JESUS LOOK LIKE A GRAY SPACE ALIEN WITH A GIANT HEAD (WE’LL TALK MORE ABOUT THAT NEXT WEEK), DO YOU SEE THE FACE OF BAPHOMET – THE BEAST THE CHURCH OF SATAN WORSHIPS?

CHECK OUT THESE PHOTOS OF THEIR GRAND MEETING HALL. THIS IS THE STAGE THE POPE AND HIS GUESTS SPEAK FROM IN FRONT OF VERY LARGE CROWDS.

Do not be deceived! The Pope is not bringing true peace. He is bringing the prophesied false peace and is fulfilling the office of False Prophet of a one-world religion. Which includes aliens but more on that next week…