REVELATION REPORT: OPENING THE PORTAL TO HELL: Who is CERN and Why are they Playing God? 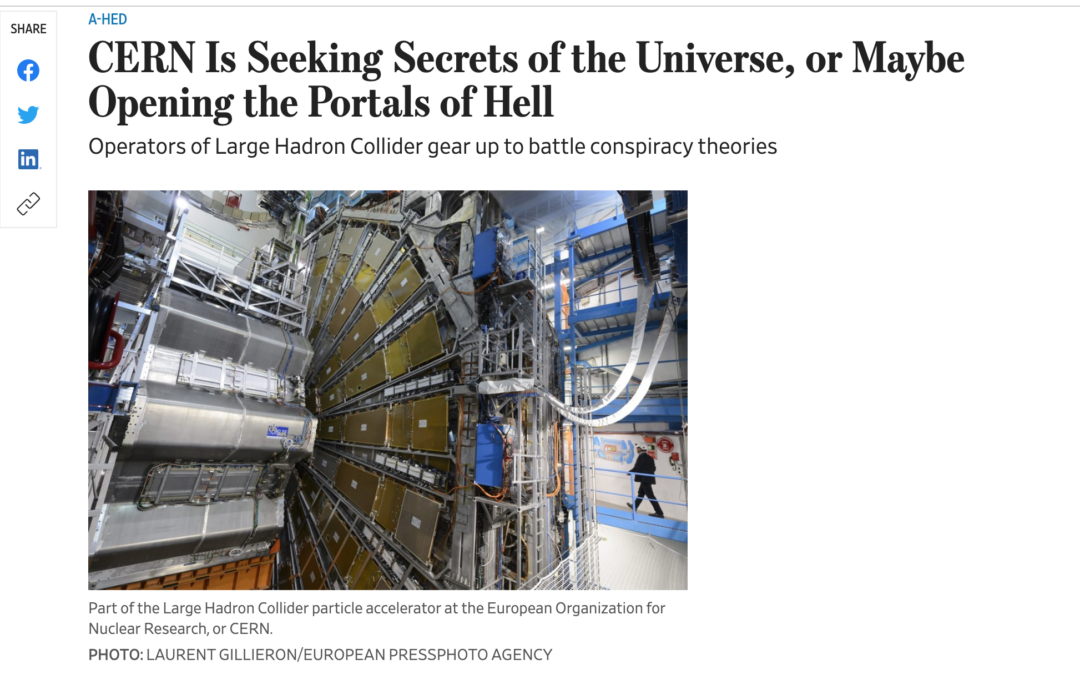 ARE PORTALS REAL? DO WE SEE THEM TODAY?

WHERE DO WE FIND PORTALS IN the Bible? (Gates, doors, windows)

Revelation 4 – After these things I looked, and behold, a door standing open in heaven. And the first voice which I heard was like a trumpet speaking with me, saying, “Come up here, and I will show you things which must take place after this.” 2 Immediately I was in the Spirit; and behold, a throne set in heaven, and One sat on the throne. (RAPTURE OF THE CHURCH THROUGH A PORTAL?)

Matthew 3:16 – When He had been baptized, Jesus came up immediately from the water; and behold, the heavens were opened to Him, and He saw the Spirit of God descending like a dove and alighting upon Him. 17 And suddenly a voice came from heaven, saying, “This is My beloved Son, in whom I am well pleased.”

Matthew 17:1-3, 5 –  Now after six days Jesus took Peter, James, and John his brother, led them up on a high mountain by themselves; 2 and He was transfigured before them. His face shone like the sun, and His clothes became as white as the light. 3 And behold, Moses and Elijah appeared to them, talking with Him….5 While he was still speaking, behold, a bright cloud overshadowed them; and suddenly a voice came out of the cloud, saying, “This is My beloved Son, in whom I am well pleased. Hear Him!”

WHERE DID MOSES AND ELIJAH COME FROM?

JACOB’S LADDER – THE FAMOUS DREAM OF THE STAIRWAY TO HEAVEN

Genesis 28:16-17 – Then Jacob awoke from his sleep and said, “Surely the Lord is in this place, and I did not know it.” 17 And he was afraid and said, “How awesome is this place! This is none other than the house of God, and this is the gate of heaven!”

A PORTAL CALLED “THE WINDOWS” OF HEAVEN ACTUALLY POURED OUT THE FLOOD!

Genesis 7:11– …on that day all the fountains of the great deep were broken up, and the windows of heaven were opened. 12 And the rain was on the earth forty days and forty nights.

ARE THERE DEMONIC PORTALS IN THE BIBLE? YES.

REVELATION MENTIONS THE BOTTOMLESS PIT,  LAKE OF FIRE, THE REALM OF THE DEAD, AND THE BLAZING FURNACE.

SIDE NOTE: MT. ENTA ERUPTED IN JUNE IN SICILY, ITALY. ETNA MEANS “I BURN” OR “FURNACE”. COULD IT BE A GATEWAY TO THE UNDERWORLD?

Jesus took his disciples to Caesarea Philippi, place of the famed “GATES OF HELL” where PAN, the God of Chaos allegedly lives.

LET’S LOOK AT OUR KEY VERSE IN REVELATION TODAY:

Revelation 9:1-2 & 11 (Fifth Trumpet: The Locusts from the Bottomless Pit) – Then the fifth angel sounded: And I saw a star fallen from heaven to the earth. To him was given the key to the bottomless pit. 2 And he opened the bottomless pit, and smoke arose out of the pit like the smoke of a great furnace. So the sun and the air were darkened because of the smoke of the pit. ….11 And they (demonic locusts) had as king over them the angel of the bottomless pit, whose name in Hebrew is  Abaddon, but in Greek he has the name Apollyon.

THIS IS A PORTAL TO HELL THAT IS OPENED UP TO LET THE HALFBREED DEMI-GOD APOLLO —A NEPHILIM OR HALF MAN/HALF FALLEN ANGELIC BEING—OUT TO TORMENT MANKIND DURING THE TRIBULATION PERIOD.

PLAYING GOD IS NOT A GOOD IDEA. (GRX HAWKING)

EVEN FAMOUS PHYSICIST AND ATHEIST STEPHEN HAWKING WARNED IN 2014 “THE GOD PARTICLE COULD WIPE OUT UNIVERSE.”

Hawking theorized a Higgs boson doomsday, where a quantum fluctuation creates a vacuum “bubble” that expands through space, destroying all in its path.

CERN, the European Center for Research in Particle Physics, located in Cern, Switzerland on the border with France, IS  FAMOUS FOR ITS SEARCH FOR THE “GOD PARTICLE” – A WAY TO MAKE MATTER AND CREATE LIFE FROM “NOTHING” BY SMASHING ATOMS TOGETHER AT LIGHT SPEED AROUND A 17-MILE LONG UNDERGROUND RING CALLED A “COLLIDER.”

IT CLAIMS TO HAVE SUCCEEDED IN 2013 FINDING THE “HIGGS BOSON” PARTICLE, WHICH THEY CLAIM GIVES PARTICLES THEIR MASS. HIGGS BOSON IS WHAT THEY BELIEVE TO BE THE “GOD PARTICLE” THAT WILL GIVE THEM THE ABILITY TO CREATE LIFE OUTSIDE OF GOD’S POWER.

IF THIS SOUNDS DEMONIC, CHECK OUT THE CERN LOGO: GRX LOGO

CERN openly sports the best known number on planet earth – 666 – the number of the man of sin or the False Prophet/Beast from the Earth of Revelation 13.

SO WHAT GOD DO THE SCIENTISTS AT CERN WORSHIP? SCIENCE? NO!

On June 18, 2004, a statue of the Indian deity Shiva was unveiled at CERN. Shiva is the Hindu “Lord of Dance” also known as “The Destroyer.”

The statue is a metaphor of the cosmic dance of subatomic particles in the supercollider, which is observed and analyzed by CERN’s physicists.

A CLOSER LOOK AT THE STATUE SHOWS SOMETHING GROTESQUE

Shiva, the Destroyer, is dancing on top of a really small man holding a snake and sticking his tongue out. (GRX SHIVA 3)

The Globalists of the world are on board with this and seem to have chosen a destroyer of their own:

Did we mention Shiva is the Hindu God of destruction?

WHAT DOES SCRIPTURE SAY ABOUT ABADDON OR APOLLYON (APOLLO)? HE IS THE GOD OF DESTRUCTION.

WAS CERN SUCCESSFUL AT OPENING THIS PORTAL TO HELL? ONLY TIME WILL TELL. MANY WARRIORS PRAYED AND INTERCEDED AGAINST IT AS THEY FELT CERN WAS TRYING TO SPEED UP THE TIMELINE TO THE TRIBULATION PERIOD AND CATCH THE CHURCH OFF GUARD.

CHANGING TIMES: NOT ONLY ARE THEY TRYING TO CONTROL THE BIBLICAL TIMELINE, CERN CLAIMS TO HAVE USED THE COLLIDER TO TIME TRAVEL.

CHANGING LAWS: IS ALL ABOUT PUSHING GOD INTO A CORNER—MAKING HIM SPEED UP A TIMELINE OR MAKE A MOVE OUTSIDE OF SCRIPTURE. THEY ACTUALLY BELIEVE THEY CAN OUTSMART GOD.

WANT TO KNOW MORE ABOUT CERN. CHECK THE DESRCIPTION BOX ON YOUTUBE OR IN MY NOTES FOR A LINK TO THE GOTTHARD TUNNEL OPENING CEREMONY.  THEY SHOW YOU IN THEIR SATANIC RELIGIOUS CEREMONY EXACTLY WHAT THE STORYLINE IS:

ALL WHILE WORLD LEADERS AND AN AUDIENCE CLAP AND CHEER THEM ON!

CERN Is Seeking Secrets of the Universe, or Maybe Opening the Portals of Hell, Wall Street Journal

The Large Hadron Collider is apparently opening a portal to hell, Dazed Digital

Stephen Hawking Says ‘God Particle’ Could Wipe Out the Universe

Why Higgs Boson Matters: All You Need to Know About the ‘God Particle’