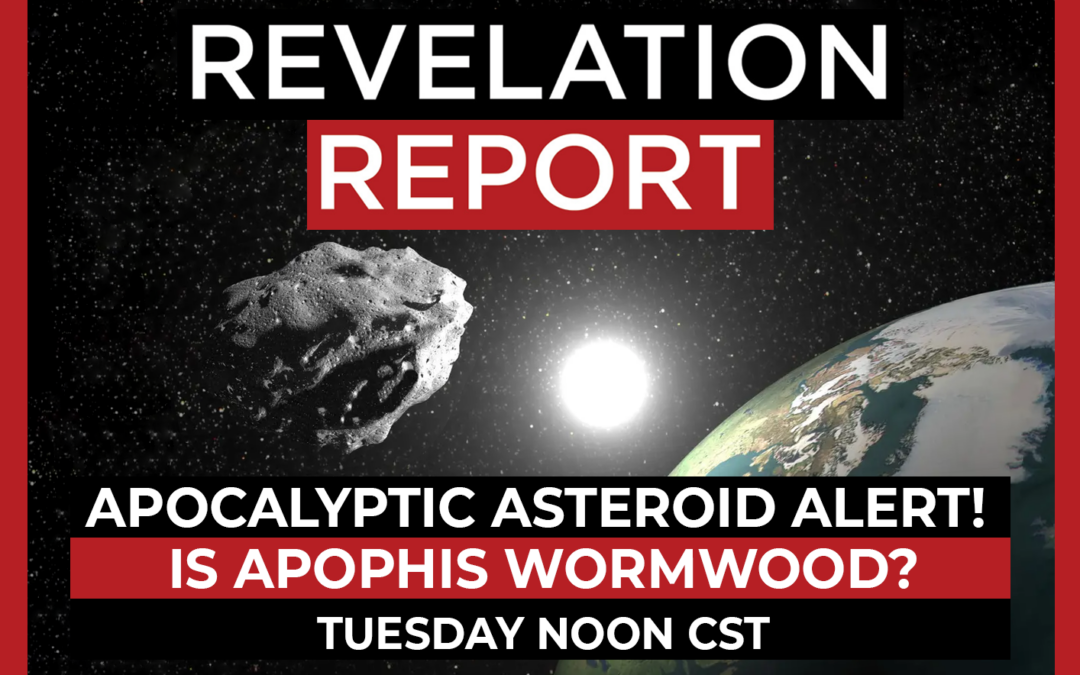 APOPHIS – asteroid headed toward earth Friday, April 13, 2029, which some believe could be the apocalyptic star “Wormwood” mentioned in Revelation.

I looked when He opened the sixth seal, and behold, there was a great earthquake; and the sun became black as sackcloth of hair, and the moon became like blood. 13 And the stars of heaven fell to the earth, as a fig tree drops its late figs when it is shaken by a mighty wind. 14 Then the sky receded as a scroll when it is rolled up, and every mountain and island was moved out of its place. 15 And the kings of the earth, the great men, the rich men, the commanders, the mighty men, every slave and every free man, hid themselves in the caves and in the rocks of the mountains, 16 and said to the mountains and rocks, “Fall on us and hide us from the face of Him who sits on the throne and from the wrath of the Lamb! 17 For the great day of His wrath has come, and who is able to stand?”

WHAT DOES AN ASTEROID OR A COMET FLYING THROUGH SPACE ACTUALLY LOOK LIKE? LET’S TAKE A LOOK AT THIS VERY PROBABLE SCENARIO FROM THE MOVIE “ARMAGEDDON.”

WHAT DOES IS MEAN THAT THE SKY ROLLED UP LIKE A SCROLL? THIS IS HOW HOLLYWOOD DEPICTED IT IN THE MOVIE ARMAGEDDON:

COULD THIS BE WHY PRESIDENT TRUMP ENACTED THE SPACE FORCE?

WE LOOKED AT THE SIXTH SEAL, NOW LET’S LOOK AT THE SEVENTH SEAL – THIRD TRUMPET

Revelation 8:10-11 – Then the third angel sounded: And a great star fell from heaven, burning like a torch, and it fell on a third of the rivers and on the springs of water. 11 The name of the star is Wormwood. A third of the waters became wormwood, and many men died from the water, because it was made bitter.

• In Egyptian mythology, Apophis (aka Apep) is the deadly demon serpent of darknesss whom Ra, the sun god, destroys every morning. (Revelation 12 dragon?)

• Apophis is also known as an “Anti-God” and enemy of order, light & truth

• In Greek, Apophis means THE DESTROYER

Revelation 9:1 – And the fifth angel sounded, and I saw a star fall from heaven unto the earth: and to him was given the key of the bottomless pit. 2 And he opened the bottomless pit; and there arose a smoke out of the pit, as the smoke of a great furnace; and the sun and the air were darkened by reason of the smoke of the pit. 3 And there came out of the smoke locusts upon the earth: and unto them was given power, as the scorpions of the earth have power. 4 And it was commanded them that they should not hurt the grass of the earth, neither any green thing, neither any tree; but only those men which have not the seal of God in their foreheads. 5 And to them it was given that they should not kill them, but that they should be tormented five months: and their torment was as the torment of a scorpion, when he striketh a man. 6 And in those days shall men seek death, and shall not find it; and shall desire to die, and death shall flee from them. 7 And the shapes of the locusts were like unto horses prepared unto battle; and on their heads were as it were crowns like gold, and their faces were as the faces of men. 8 And they had hair as the hair of women, and their teeth were as the teeth of lions. 9 And they had breastplates, as it were breastplates of iron; and the sound of their wings was as the sound of chariots of many horses running to battle. 10 And they had tails like unto scorpions, and there were stings in their tails: and their power was to hurt men five months. 11 And they had a king over them, which is the angel of the bottomless pit, whose name in the Hebrew tongue is Abaddon (“destruction”), but in the Greek tongue hath his name Apollyon (“Destroyer”).

Genesis 27:42 – And the words of Esau her older son were told to Rebekah. So she sent and called Jacob her younger son, and said to him, “Surely your brother Esau comforts himself concerning you by intending to kill you.”

Matthew 27:42 – “He saved others; Himself He cannot save. If He is the King of Israel, let Him now come down from the cross, and we will believe Him.”

Can literally crack the mantle of the earth.

WHERE? Coastline of California and Mexico – tip of the Ring of Fire Volcanoes of the Pacific Rim – 12 massive volcanoes. The most dangerous place on earth.

October 10: John 10:10 – The thief comes only to steal and kill and destroy; I have come that they may have life, and have it to the full.

IF APOPHIS IS NOT THE STAR WORMWOOD, COULD THIS COMET FIT THE BILL?

Comets also could be described as “burn[ing] like a torch” to the ancient eye. The “great sign” mentioned in Revelation 12:1-6 may refer to a comet.

We know about those with regular, predictable trajectories—like Halley’s Comet—but some have such enormous trajectories that they are NEW to us here on earth.

One of these, NEOWISE, was discovered in March 2020 and was visible with the naked eye when it passed by earth. It’s not on track to near our planet again for another 6,800 years.

Genesis 11:4 – And they said, “Come, let us build ourselves a city, and a tower whose top is in the heavens; let us make a name for ourselves, lest we be scattered abroad over the face of the whole earth.”

Proverbs 27:1 – Do not boast about tomorrow, for you do not know what a day may bring.

Psalm 27:1 –The LORD is the stronghold of my life– of whom shall I be afraid? When evil men advance against me to devour my flesh, when my enemies and my foes attack me, they will stumble and fall. Though an army besiege me, my heart will not fear; though war break out against me, even then will I be confident

The European Space Agency is building a mission called Comet Interceptor  to look for comets coming from deep space to the inner solar system.

God uses signs in the skies above us to signal what He’s doing on earth. Jesus said this Himself:

Luke 21:25-28 – “And there will be signs in the sun, in the moon, and in the stars; and on the earth distress of nations, with perplexity, the sea and the waves roaring; 26 men’s hearts failing them from fear and the expectation of those things which are coming on the earth, for the powers of the heavens will be shaken. 27 Then they will see the Son of Man coming in a cloud with power and great glory. 28 Now when these things begin to happen, look up and lift up your heads, because your redemption draws near.”

Not only does “Look Up” mean “Look at the stars,” it means get your head out of the TV, your device, that book, your work, the Dallas Cowboys – whatever it is that’s gotten your attention — look up from it to see what the Lord has for you.