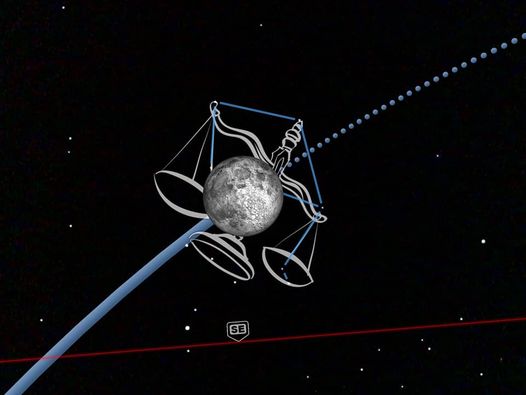 NASA has finally done it. They’ve aimed a powerful lunar camera at the center of our Milky Way Galaxy and this is what they found (GRX GALAXY)

God is shouting just as he was when we discovered the Whirlpool Galaxy—our closest galactic neighbor which looks like a stop sign in the heavens just begging us to look.

Look at what? The very center (GRX X-STRUCTURE)

IF THAT WAS A DREAM, WHAT WOULD IT MEAN?

There are at least 43 scriptures referring to blood moons and the “Day of the Lord.”

The day Jesus comes back to the Mt. of Olives to “tabernacle” with is people for 1,000 years.

Revelation 6:12 (Sixth Seal: Cosmic Disturbances) – I looked when He opened the sixth seal, and behold, there was a great earthquake; and the sun became black as sackcloth of hair, and the moon became like blood.

Joel 2:31 – The sun shall be turned into darkness,

and the moon into blood, before the coming of the great and awesome day of the Lord.

Matthew 24:29 (The Coming of the Son of Man) – “Immediately after the tribulation of those days the sun will be darkened, and the moon will not give its light; the stars will fall from heaven, and the powers of the heavens will be shaken.”

DATE: May 15 – KNOWN AS SECOND PASSOVER ON HEBREW CALENDAR

God commanded the Jews to celebrate the passover, the applying of blood and the eating of the lamb “in haste.”

Moses instituted second passover—Pesach Sheni— the day when someone who was unable to participate in the Passover offering in the proper time would observe this feast exactly one month later.

Joshua 5:15 – Then the Commander of the Lord’s army said to Joshua, “Take your sandal off your foot, for the place where you stand is holy.” And Joshua did so.

James 5:15 – And the prayer of faith will save the sick, and the Lord will raise him up. And if he has committed sins, he will be forgiven.

Hebrews 10:29 – Of how much worse punishment, do you suppose, will he be thought worthy who has trampled the Son of God underfoot, counted the blood of the covenant by which he was sanctified a common thing, and insulted the Spirit of grace?

There is no place better to see this played out than in November 11 – Eleven-Eleven – a day that Americans call Veteran’s Day. If you don’t already know this, November 11 is amazingly stamped with the number eleven, and in many ways, it is associated with urgency and heroes rising.

Did you know that World War One officially ended on the eleventh hour of the eleventh day of the eleventh month of 1918? In America, we celebrate the end of hostility and the beginning of unity with Veteran’s Day – a day to remember and recognize the heroes who gave their all for the cause of freedom and peace.

11:11 Scriptures in the Positive – Selfless Service and Heroes Rising

Deuteronomy 11:11 – But the land you are crossing the Jordan to take possession of is a land of mountains and valleys that drinks rain from heaven.

1 Samuel 11:11 – The next day Saul separated his men into three divisions; during the last watch of the night they broke into the camp of the Ammonites and slaughtered them until the heat of the day. Those who survived were scattered, so that no two of them were left together.

2 Kings 11:11 – The guards, each with weapon in hand, stationed themselves around the king—near the altar and the temple, from the south side to the north side of the temple.

John 11:11 – After he had said this, he went on to tell them, “Our friend Lazarus has fallen asleep; but I am going there to wake him up.”

Romans 11:11 – Again I ask: Did they stumble so as to fall beyond recovery? Not at all! Rather, because of their transgression, salvation has come to the Gentiles to make Israel envious.

Hebrews 11:11 – And by faith even Sarah, who was past childbearing age, was enabled to bear children because she considered him faithful who had made the promise.

DAVID HAD 11 MIGHTY MEN OF VALOR. ELEVEN IN THE POSITIVE MEANS HEROES RISING UP AND THAT’S EXACTLY WHAT 1 CHRONICLES ELEVEN-ELEVEN IS ALL ABOUT.

1 Chronicles 11:11 – Jashobeam, a Hakmonite, was chief of the officers; he raised his spear against three hundred men, whom he killed in one encounter.

Then there is the rock star John the cousin of Jesus:

Matthew 11:11 – Truly I tell you, among those born of women there has not risen anyone greater than John the Baptist; yet whoever is least in the kingdom of heaven is greater than he.

ELEVEN IN THE NEGATIVE – JUDGMENT OF DISORDER

JOSPEH CREATED A BIG MESS WHEN HE TOLD HIS DREAMS TO HIS FAMILY. THESE DREAMS WERE BETWEEN GOD AND JOSEPH HIMSELF – GOD TRUSTED HIM WITH THIS INFORMATION ABOUT HIS FUTURE. BUT JOSEPH USED THAT INFORMATION TO DRIVE A HUGE WEDGE OF JEALOUSY AND BITTERNESS BETWEEN HIMSELF AND HIS BROTHERS – THEY EVENTUALLY FAKED HIS DEATH AND SOLD HIM INTO SLAVERY:

Genesis 37:27 – Come, and let us sell him to the Ishmeelites, and let not our hand be upon him; for he is our brother and our flesh. And his brethren were content.

SOLOMON, THE WISEST MAN EVER TO LIVE, HAD HIS SHARE OF DISORDER:

1 Kings 11:11 – So the Lord said to Solomon, “Since this is your attitude and you have not kept my covenant and my decrees, which I commanded you, I will most certainly tear the kingdom away from you and give it to one of your subordinates.”

Job 11:11 – Surely he recognizes deceivers; and when he sees evil, does he not take note?

JEREMIAH, EZEKIEL AND DANIEL ALL LIVED IN DAYS FILLED WITH GOD’S JUDGMENT FALLING ON THE DISORDER OF REBELLIOUS MAN:

Jeremiah 11:11 – Therefore this is what the Lord says: ‘I will bring on them a disaster they cannot escape. Although they cry out to me, I will not listen to them.”

Ezekiel 11:11 – This city will not be a pot for you, nor will you be the meat in it; I will execute judgment on you at the borders of Israel.

Proverbs 11:11 – Through the blessing of the upright a city is exalted, but by the mouth of the wicked it is destroyed.

Isaiah 11:11 – In that day the Lord will reach out his hand a second time to reclaim the surviving

WORDS WITH A GEMATRIA OF 1,111 IN THE NEGATIVE

WHERE DID WE FIND THE MOON LAST NIGHT? IN THE CONSTELLATION LIBRA – THE SCALES OF JUSTICE (GRX Libra Moon)

WHEN THE WIDOW HAS A HOME, THE ORPHAN A FAMILY AND THE HOMELESS A COMMUNITY –- ALL IS SET RIGHT!

LIBRA’S PROPHETIC PROMISE: THE LAW REQUIRES A PRICE TO BE PAID. THE MESSIAH WOULD PAY THE TERRIBLE PRICE REQUIRED FOR OUR REDEMPTION

Psalms 49:8  – For the redemption of their souls is costly

Lupus or Victima (The Victim)

Mozanaim (Weighed in the Balance – Daniel 5:27)

Prophetic Word – This sign proclaims God our Redeemer makes things right. He is a righteous Judge who will redeem you from past hurts and mistakes. He will give you hope and future.

Prophetic Number – Two represents a faithful witness, Godly division and being set apart from the world.

THE GRAND-DADDY OF ALL 11:11 SCRIPTURES IS REVELATION ELEVEN-ELEVEN, WHERE THE 2 WITNESSES RISE FROM THE DEAD  AS THE HEROES OF THE FAITH THEY ARE. THEY ALSO BRING JUDGMENT ON THE DISORDER OF REBELLIOUS MAN, THE ANTI-CHRIST AND THE FALSE PROPHET.

Revelation 11:11 – But after the three and a half days the breath of life from God entered them, and they stood on their feet, and terror struck those who saw them.

How lovely is Your tabernacle,O Lord of hosts!2 My soul longs, yes, even faintsFor the courts of the Lord;My heart and my flesh cry out for the living God.3 Even the sparrow has found a home,and the swallow a nest for herself,Where she may lay her young—Even Your altars, O Lord of hosts,My King and my God.4 Blessed are those who dwell in Your house; They will still be praising You. Selah

Psalms 84:11 – For the Lord God is a sun and shield; The Lord will give grace and glory; No good thing will He withhold from those who walk uprightly.

Psalm 84:11 calls the Lord God our “sun” and shield. Check out the only other place I can find God/Jesus called our “Sun”:

Malachi 4 – The Great Day of God

“For behold, the day is coming, Burning like an oven, and all the proud, yes, all who do wickedly will be stubble. And the day which is coming shall burn them up,” says the Lord of hosts, “That will leave them neither root nor branch. 2 But to you who fear My name The Sun of Righteousness shall arise With healing in His wings; And you shall go out and grow fat like stall-fed calves.”