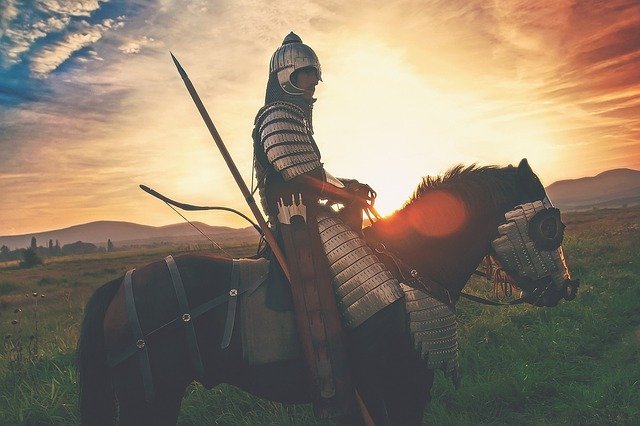 I know you are tired of fighting the same battle with the same evil tyrant. Praise Me in that place. Lift your hands and praise Me. Hold up My battle banner. Fight with your praise and worship and I will bring you victory for My Name’s sake.

You hold on to the righteousness of Jesus Christ when your child gets sick, when your job gets taken away, your marriage is on the rocks or your money disappears. That’s what it means to stand.

Listen, you don’t have to stand for forever. You’ll get to advance again – I promise you will. And this is how I know: because it happened in the Bible to Moses and Joshua in Exodus chapter 17.

An evil king, Amalek, wanted to wipe out the children of Israel before they reached the Promised Land. Isn’t that just like the enemy to try and kill the promise before it can manifest?

Well, the Lord told Joshua to take his men and fight this much more skilled, better-armed fighting force. Then, God Almighty told Moses to hold his hands up high and as long as he kept them up, Joshua would be victorious.

Now, think about what that looked like. It must have looked like Moses was holding up a banner! While his arms were raised, Israel was winning. If he got tired and they fell, the Amalekites would start winning. Aaron and Hur had to hold Moses’ arms up and the Lord gave them the victory.

Just like that, Jehovah Nissi will show up on your battlefield. The momentum will change. His banner will be seen and you’ll be like, “Dude, the King has shown up on my battlefield!”

The momentum changes and Jesus brings you the victory. That’s the whole understanding of Jehovah Nissi as “The Lord is our Banner.”

Then the Lord said to Moses, “Write this for a memorial in the book and recount it in the hearing of Joshua, that I will utterly blot out the remembrance of Amalek from under heaven.” And Moses built an altar and called its name, The-Lord-Is-My-Banner… – Exodus 17:15

What Amalekites need to be wiped off the face of your earth? What battle do you need the Lord to win on your behalf? You will get tired. The battle will take time, but put your hands in the air and call on Jehovah Nissi – The Lord is our Banner – to shift the momentum for your victory.